The problem was clear. The executive team of a consumer healthcare company had concluded that the rise of new competitors meant the company needed to up its innovation game. The company had spent the past two decades focused on implementing Six Sigma processes across the enterprise and it was primed to execute on the best and smartest ideas.

We advised them that solving the problem required a carefully orchestrated set of interventions where we would “fight systems with systems,” making sure we linked a coherent innovation strategy to robust innovation processes, enabling structures, and work to make the underlying culture more supportive of behaviors and mindsets that drive successful innovation.

A creativity consultant said to signal that it was a new era in the organization, all of the top executives should dress up as innovation superheroes. And that was it. No ring-fenced resources to pursue innovation. No tools or training. No special incentives. No definition of specific areas where the company should focus its energy.

The only piece of good news for the executive team is the “intervention” (which failed to have any impact, of course) occurred before smartphones were ubiquitous enough to capture video footage. (If this sounds familiar to some of you it is because we mentioned it to a BusinessWeek reporter in 2007, and IBM created a series of commercials with “innovation man” in them). We have nothing against spandex, and believe fun and play have a big role to play in a culture of innovation. But the real answer is surely more complex.

Because innovation is a system-level problem, a point solution – trying to drive widespread change by doing a single thing – is wholly ineffective. It is equivalent to attempting to turnaround a failing school plagued by disinterested students, overwhelmed teachers, and crumbling infrastructure by painting the walls blue. Soothing, perhaps, but unlikely to have any real impact.

We have seen far too many first hand examples of the equivalent of blue paint on a decrepit school wall. Rather, leaders hoping to boost their ability to drive growth through innovation need to simultaneously direct it strategically, pursue it rigorously, resource it intensively, monitor it methodically, and nurture it carefully.

This is clearly not easy stuff. Many of the most common missteps we see companies make would fit nicely in Steve Kerr’s management classic, “The folly of rewarding A, while hoping for B.” Here are the six most common mistakes we see:

Asking employees to generate ideas without creating mechanisms to do something with them. Executives often get fooled by inspiring stories of engineers at companies like 3M or Google coming up with germs of ideas in the 15-20% of their time they allocate to side projects. If your organization does indeed have mechanisms to take idea fragments, process them, and turn them into fully fleshed out innovations, by all means open up the idea spigot. Otherwise, all you create is a long list of ideas that never go anywhere, and substantial organizational cynicism. This doesn’t necessarily mean setting up a department, but at the very least develop a set of criteria by which to judge ideas and have suggestions for how the best ideas can be acted on.

Pushing for answers without defining problems worth solving. We define innovation as something different that creates value. You only create value if you solve a problem that matters. Executives often think that the best way to spur innovation is to remove constraints, to let hundreds or thousands of flowers bloom. Overly fragmented efforts result in nothing more than a lot of undernourished flowers. Constraints and creativity are surprisingly close friends. Problems can range from entering new markets to addressing everyday concerns such as low employee engagement. Whatever they are, the more specific, the better.

Urging risk-taking while punishing commercial failure. “If I find 10,000 ways something won’t work, I haven’t failed,” Edison once said. “I am not discouraged, because every wrong attempt discarded is often a step forward.” Indeed, the academic literature suggests that almost every commercial success had a failure somewhere in its lineage. But inside most companies, working on something that “fails” commercially carries significant stigma, if not outright career risk. It’s no surprise that people play it safe! That’s not to say that companies should encourage failure. When people do something stupid, or they are sloppy, or they screw up something that has dramatic repercussions on the business, they should absolutely be held accountable (can you imagine a heart surgeon talking proudly about the patients he or she killed?). The trick is simply recognizing that in the early stages of innovation what at first appears to be failure is anything but.

Expecting experiments without providing access to a well-stocked laboratory. It is increasingly well-understood that innovation success traces back to disciplined experimentation. Leaders transfixed with The Lean Startup or related books often urge their teams to develop minimum viable products or find other ways to rapidly prototype ideas. Indeed, finding smart ways to test is critical to innovation success, and this discipline goes well beyond prototypes. Consider what allowed the Wright brothers to successfully create a machine that allowed humans to fly. While most would-be aviators spent years building prototypes of their ideas, and then risked life and limb testing them, the Wright brothers flew kites and built wind tunnels. If your innovators don’t have the materials to build kites, or the space to fly them – or if they need to get 12 approvals to do so – don’t expect to see much experimentation.

Pleading for breakthrough impact without allocating A-team resources. Far too many companies create what you might call Potemkin portfolios. Just like the Russian prince Grigory Potemkin impressed Catherine the Great with villages that were nothing more than facades, companies build beautiful ideas on paper without considering the resources to turn them into reality. Innovation is hard work. The vast majority of startup companies fail, and that’s with tireless dedication from a team that has nothing to lose. If you don’t dedicate the right resources to your best ideas, you are consigning them to failure.

Demanding disruptive ideas, without ring-fencing resources for them. The essence of Clayton Christensen’s famous Innovator’s Dilemma is that companies privilege investments to sustain today’s business over those that have the potential to create tomorrow’s business. Along some dimensions, this is quite rational. After all, a dollar invested in the existing business produces a measurable, near-term return, whereas a dollar invested in a non-existent business promises ethereal returns at a difficult-to-pin down future date. Of course, over the long-run that disruptive investment might be a better proposition, but if the company hasn’t set aside resources specifically to drive disruption, the short-term will always win.

There is obviously a lot of value in pushing for more ideas, encouraging experimentation, and building breakthroughs. But take the time to think about the logical connection points inside your organization. Thinking at a system level will help to maximize your chances of driving impact. And minimizes the chances of being forced to wear spandex.

GIM Institute
The Global Innovation Management Institute (GIM Institute or GIMI) is a global, nonprofit organization with a mission to make innovation a management discipline 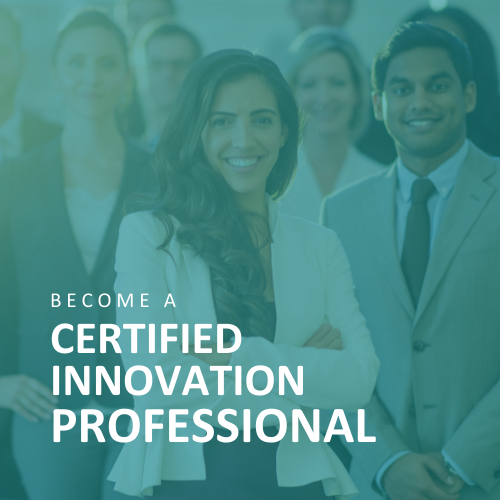 If you are looking to learn about business innovation, the process to drive it forward, and tools to generate breakthrough innovations